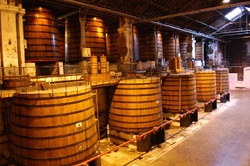 The word Brandy comes from the Dutch word brandewijn, (“burnt wine”), which is how the straightforward Dutch traders who introduced it to Northern Europe from Southern France and Spain in the 16th century described wine that had been “burnt,” or boiled, in order to distill it. The origins of Brandy can be traced back to the expanding Moslem Mediterranean states in the 7th and 8th centuries. Arab alchemists experimented with distilling grapes and other fruits in order to make medicinal spirits. Their knowledge and techniques soon spread beyond the borders of Islam, with grape Brandy production appearing in Spain and probably Ireland (via missionary monks) by the end of the 8th century. Brandy, in its broadest definition, is a spirit made from fruit juice or fruit pulp and skin. More specifically, it is broken down into three basic groupings.

Grape Brandy is Brandy distilled from fermented grape juice or crushed but not pressed grape pulp and skin. This spirit is aged in wooden casks (usually oak) which colors it, mellows the palate, and adds additional aromas and flavors 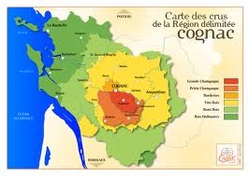 Pomace Brandy (Italian Grappa and French Marc are the best-known examples) is Brandy made from the pressed grape pulp, skins, and stems that remain after the grapes are crushed and pressed to extract most of the juice for wine. Pomace Brandies, which are usually minimally aged and seldom see wood, are an acquired taste. They often tend to be rather raw, although they can offer a fresh, fruity aroma of the type of grape used, a characteristic that is lost in regular oak-aged Brandy.

Fruit Brandy is the default term for all Brandies that are made from fermenting fruit other than grapes. It should not be confused with Fruit-Flavored Brandy, which is grape Brandy that has been flavored with the extract of another fruit. Fruit Brandies, except those made from berries, are generally distilled from fruit wines. Berries tend to lack enough sugar to make a wine with sufficient alcohol for proper distillation, and thus are soaked (macerated) in high-proof spirit to extract their flavor and aroma. The extract is then distilled once at a low proof. Calvados, the Apple Brandy from the Normandy region of Northwestern France, is probably the best known type of Fruit Brandy. Eau-de-vie (“water of life”) is the default term in French for spirits in general, and specifically for colorless fruit brandy, particularly from the Alsace region of France and from California.